Olivia's hands were shaking as she opened the small, pink box containing the pregnancy test. She carefully unfolded the instructions, which she read every single time she was about to use one of these sticks. The familiar words raced through her mind without really registering, but she knew the important parts by heart. Accurate up to five days before your period, and then, the appearance of one line is a negative result, the appearance of two lines is a positive result. She took a deep breath, closed her eyes, and whispered, “Here it goes.”

After placing the test stick face up on the counter and flushing the toilet, Olivia looked around her bathroom, studying the tiny purple flowers on her shower curtain and that place in the corner where the warm tan paint she had applied to the wall slightly overlapped the white baseboard. She noticed that they were running low on shampoo and that she needed to get a new bar of soap from the closet in the hall. She consciously kept her gaze away from the small piece of plastic lying on the corner of her counter while the required three minutes seemed to drag on for thirty. She checked her watch. Nope. One minute left to go. She knew if she glanced at the test, she would be able to get an idea of what the results were, since the lines would already be forming. Instead, Olivia directed her eyes to the laundry hamper and made a mental note that she would need to wash a load of whites today.

One more peek at her watch told Olivia that the time was up. She could check the results. Her heart was racing, and her palms had become wet and sticky. She chided herself for getting so worked up. The results would be whatever they were, and she could not do anything about them now. Olivia did not realize that she was holding her breath as she reached over, gripped the test stick in her hand, and looked down. One line. Negative. She was not pregnant.

Olivia felt the air rush from her lungs as though she had been hit right in the belly. She dropped the stick with a little clatter on the tile floor and braced herself against the vanity cabinets as she slid down to sit on the plush bathroom rug. Olivia propped her elbows on her knees and buried her face in her hands. The tears came as they always did. Slowly at first, as the results of the pregnancy test sank in, then harder and harder until the sobs were bursting, uncontrolled, from her chest. She let herself have a good, hard cry, then rubbed her eyes in anger and frustration when the tears stopped coming and her eyes began to burn.

Partly, Olivia was angry with herself. Angry that she had let her hopes build up once again. Frustrated that the news was still affecting her in this way. This was, after all, the twelfth pregnancy test she had taken in as many months. Every month she told herself that she was not going to buy another test. She would just wait and let nature tell her whether she was pregnant or not, but the “not knowing” was almost as unbearable as finding out she wasn’t.

Olivia also had to admit that she was getting frustrated with Heavenly Father. Having a family was her greatest desire, and she could not understand why that blessing was being withheld. Before her mind could wander too far in that direction, there was a soft knock on the bathroom door.

“Livvy, are you okay? I’ve got to leave or I’ll be late for work.” It was Michael. This was the part Olivia dreaded most of all. Michael wanted a child as much as she did, and it broke her heart to have to tell him month after month after month that there was still no baby on the way. She stood up and splashed a little cool water on her face. After a quick pat dry, she opened the door.

Before Olivia could even open her mouth, Michael knew. Her big blue eyes were not bright and vibrant as usual; they were darker—almost gray—a sure sign that she had been crying. She gave a nearly imperceptible shake of her head and attempted to shrug off the ache in her heart.

Michael tried to hide the disappointment that rushed through him. He knew that Livvy needed him to be strong right now. He opened his arms and said, “Oh, Livvy, I’m so sorry!”

As she buried her head in his shoulder and the tears started flowing again, she whispered, “Me too, Michael. Me too.”
Posted by Jennifer Holt at 8:05 PM No comments: 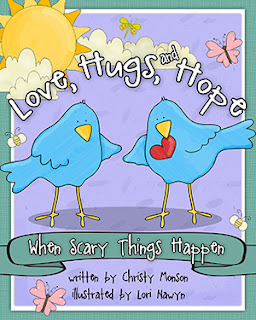 I really enjoyed this sweet children's book written by Christy Monson and illustrated by Lori Nawyn.  Christy is a retired marriage and family therapist, and her expertise is evident in the way she simply and beautifully talks to children about how to work through their feelings "When Scary Things Happen".

"Sometimes bad things happen to good people"... this book begins.  It offers caring and practical advice about how children - or adults for that matter - can express feelings, let them out, and work to feel safe.  My favorite is "kick a pile of dirty laundry!"  (There would be plenty of options at my house.)

If you'd like to purchase this simple, yet very insightful book, you can find it at the below links.

Posted by Jennifer Holt at 10:57 AM No comments:

Click on the book cover to order your copy today!